BIAPT is very sad to note the death of Professor Tracy B. Strong, Professor of Political Theory and Philosophy at the University of Southampton and Distinguished Emeritus Professor at UC San Diego. He authored several books including Friedrich Nietzsche and the Politics of Transfiguration, Jean-Jacques Rousseau: The Politics of the Ordinary, The Idea of Political Theory: Reflections on the Self in Political Time and Space, and Learning One’s Native Tongue: Citizenship, Contestation, and Conflict in America. Tracy was the recipient of the David Easton Prize 2013 for his book, Politics Without Vision: Thinking without a Banister in the Twentieth Century (Chicago, 2012) and held fellowships from the National Endowment for the Humanities and the Rockefeller Foundation. He was the Editor of Political Theory from 1990 to 2000.

We had the privilege of hosting him as a keynote speaker at the 2015 Conference when he delivered a lecture on “Christ, Antichrist and Christianity: on morality, religion, politics and love in Nietzsche”. 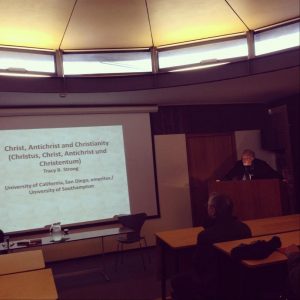 BIAPT is very sad to note the death of Tracy B. Strong, Professor of Political Theory and Philosophy at the univers… twitter.com/i/web/status/1…
Visit Twitter
[asp_product id="1917"]
×
This site uses cookies: Find out more.