The winner of the BIAPT mid-career prize is Dr Robin Douglass of the Department of Political Economy, King’s College, London. Since defending his PhD at the University of Exeter in 2011, Dr Douglass has made a huge contribution to the community of political theorists in Britain and Ireland, through his outstanding research and teaching, as well as his broader professional activities, his work as journal editor and energetic presence in numerous scholarly associations. 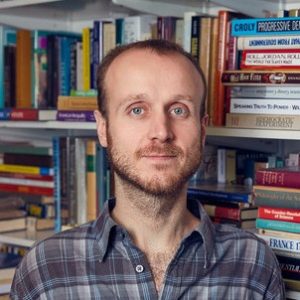 Dr Douglass published his first monograph with Oxford University Press in 2015. Rousseau and Hobbes: Nature, Free Will, and the Passions offers an illuminating exploration of the intellectual relationship between these two titanic figures, showing how Rousseau wrestles philosophically with the legacy of Hobbes’s concepts as he develops his own account of political order. Dr Douglass now has a second monograph forthcoming in 2023 with Princeton University Press, entitled Mandeville’s Fable: Pride, Hypocrisy, and Sociability, which advances an innovative re-reading of Bernard Mandeville’s ‘The Fable of the Bees’ as a serious and important work of political philosophy.

In addition to these two books, Dr Douglass’s rigorously researched and carefully argued scholarship has appeared in several articles, published in leading international journals, that have pushed political theorists to rethink how various historical writers understand and contest the key concepts of modernity. The quality and focus of Dr Douglass’s research is such that it immediately makes its way onto undergraduate reading lists. Dr Douglass has taught a variety of modules at King’s, where he has shown how crucial consideration of the history of political thought can be as part of the study of political economy.

Dr Douglass has also played an important role within the broader scholarly community. Though at the time only five years into his position at King’s, he took on the role as co-editor of the European Journal of Political Theory in 2017, served also as five years as President of the European Hobbes Society (of which he was co-founder), and undertook the role of academic convenor for the BIAPT annual conference in 2017. In deciding the award, the BIAPT judges were especially impressed that Dr Douglass was able to combine such committed work for the scholarly community alongside his extraordinary research output.

Dr Douglass said, “I am delighted to be awarded this prize. I am very grateful to the BIAPT judges, and especially to the many people who have supported my academic career and made this achievement possible.”

Note: In August 2022, after being selected as the winner of the Mid-Career Prize, Robin Douglass was promoted to Professor of Political Theory at King’s, reflecting his many achievements.