The judges are delighted to award the Britain and Ireland Association for Political Thought’s 2021 Mid-Career Prize to Dr Humeira Iqtidar. One of the most exciting developments in the field in recent years has been the emergence and consolidation of comparative political theory, and Dr Iqtidar has been a central figure in this enterprise in London and beyond, combining a genuine interdisciplinarity in her scholarship—the use of ethnography in her research stands out—with a proven ability to get her work published in the leading journals on both sides of the Atlantic, both general journals of political science and specialist political theory journals, including Political Studies, the European Journal of Political Theory, the Journal of Politics, and Political Theory. 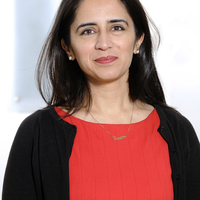 Dr Iqtidar studied at Quaid-e-Azam University in Islamabad and McGill University in Montreal before coming to Cambridge, where she wrote her doctoral thesis at Jesus College and was elected a Junior Research Fellow at King’s. In 2011 she became Lecturer in Politics at King’s College London, being promoted to Senior Lecturer in 2015 and Reader—her current post—in 2019. Dr Iqtidar’s research speaks to a number of academic audiences in South Asian studies, Sociology, religious studies, and comparative political thought. Her monograph, Secularizing Islamists? Jama’at-e-Islami and Jama’at-ud-Da’wa in Urban Pakistan (Chicago, 2011) showcases the use of anthropological methods, with a striking dual argument at its core, that not only that Islamism an innovation in Islamic thought that emerged as a creative and oppositional response to colonial secularism, but also that, despite the Islamist critique of secularism, Islamists are inadvertently supporting the secularisation of society in terms of facilitating a qualitatively different imagination of religion. She has also co-edited with Tanika Sarkar a collection on Tolerance, Secularization and Democratic Politics in South Asia (Cambridge, 2018), and she has continued to work on questions related to toleration and justice in recent Islamic thought, with due attention to the discursive effects of colonialism and its legacies, always working to broaden the range of sources we use for the serious study of political thought, in particular mining sources that have often been historically overlooked.

In addition to her excellent scholarship and her teaching of comparative political theory, she is also a fine citizen of the broader research community, having founded the London Comparative Political Theory Group and sponsored the use of imaginative research methods through her work for the London Interdisciplinary Social Science Doctoral Training Programme, as well as making significant editorial contributions. Dr Iqtidar is therefore a thoroughly deserving winner of the second BIAPT Mid-Career Prize.

In response to her award, Dr Iqtidar said ‘I am delighted to accept the BIAPT Mid-Career prize. BIAPT has long provided an exciting intellectual space for political theorists, particularly through its annual conference, and I am deeply honoured to be associated with it’.